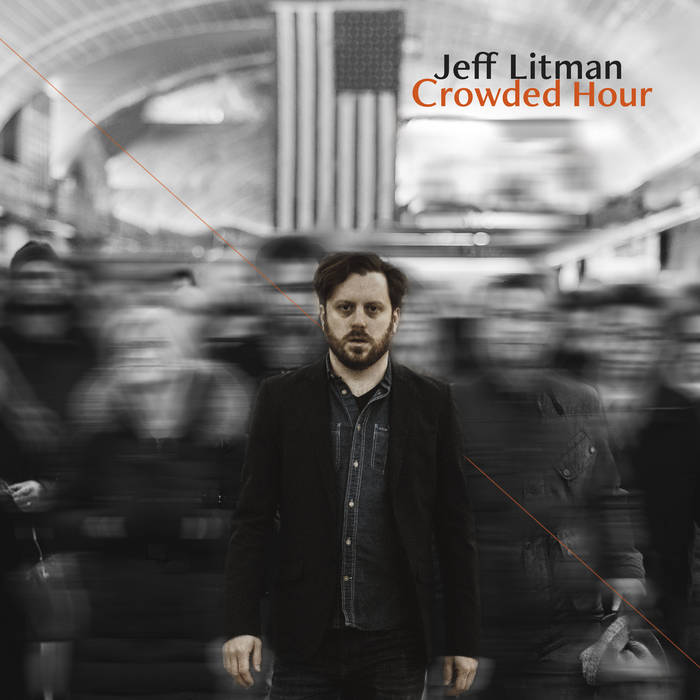 Jeff Litman is one of the self-sufficient creative factories operating in post-industrial Brooklyn by the Gowanus Canal. Singer, songwriter, multi-instrumentalist, and producer, he lives among filmmakers, designers, and other accomplished craftspeople who make art in the slanted light of post-Obama America.

After the crafty power-pop moves of 2015's critically beloved Primetime, Litman's latest release, Crowded Hour comes on like the first glimmers of an immersive club drug —a stylistic direction hinted at by Litman’s spacey, melancholic production of “You Only Live Twice,” his and Andi Rae Healy’s contribution to 2017’s all-star compilation, Songs. Bond Songs: The Music of 007 (Curry Cuts). On Crowded Hour, electro nocturnes of fleeting loves and compromised senses evoke a bluer-than-blue state under siege. Its soundscape is an artisanal blend of early-'80s Peter Gabriel and Prince, with an expansive palette of drum-loops scene-shifting from late-night fog to tapping anticipation, while distortion-wrought drones charge certain moments with the noisy transcendence of wizards from Nils Cline to Robert Fripp. The title is a phrase Litman heard attributed to New York's own Teddy Roosevelt, who so described a heroic (and fictional) charge up San Juan Hill that propelled him into the White House. "I'm not sure it has relevance to the album," Litman says of the phrase. "I just thought it sounded cool." But like some pre-dawn stretches of sleeplessness, his latest songs are indeed crowded. With the ghosts, memories, and illusions that visit adulthood in a time-warping age.

"One Foot Forward" opens with a shimmering invocation of someone who's gone but ever-present. A hushed pause before some action with mortal stakes, the song builds to vocal heroics and explosive drama primed for a coming-of-age film's crucial montage. “Only You" falls into this songwriter's sweet spot of love-song titles masking power-pop self-castigation. Its terse yet baroque composition is something you'd hear on a lost Raspberries single; a short suite for Mellotron and female vocal harmonies breezing straight into a fast-and-dirty guitar solo Elliot Easton might've dropped into 8 bars of an early Cars classic. Litman wrote all songs from 2014-15, during a rocky romantic transition, when he still shared the Earth with David Bowie, Tom Petty, and Prince. Each of these far-flung artists has long been a key strand in Litman's distinct sonic weave, but he uses each one's sound and harmonic language with a virtuoso's fluency and fanboy's discretion. With its note-perfect falsetto and subterranean moisture, "Next Affair" executes that impossible fusion of Prince and Elvis Costello, its surreal come-ons telegraphing cynical acceptance of post-Tinder erotic roundelays, where liaisons end as soon as begun. On "Shiny Diamond,” Litman sets the scene with a series of images, like someone studying snapshots from an old photo album, voicing a passing thought of anyone who's spent the better part of their adulthood in Manhattan, telling a former lover in a photograph, “I will never leave your island / and you'll never grow old."

Massive thanks to Traci Bransford; Kristen Agee and Danielle Mignogna at 411 Music Group; My fantastic live band—Andrea Longato, Mason Ingram, Matt Basile, Elliot Jacobson, and John Kengla; John Brodeur, Bradley Gunyon, and Seth Ondracek from my other band, Bird Streets; All the other musicians in NYC that I have the pleasure and privilege of working with; my parents, Stephen and Mitzi Litman; And the most supportive partner I could hope to have in my life, Andi Rae Healy.